Highlights: San Miguel vs. Alaska | PBA Philippine Cup 2016 - 2017
(Video by Sports5 on YouTube)
The San Miguel Beermen closed the fourth quarter on a 7-2 run to steal the game away from the Alaska Aces, 93-88, in the 2017 PBA Philippine Cup at the Araneta Coliseum on Saturday (December 3).

June Mar Fajardo recorded his third straight double-double of the season with 23 points and 22 rebounds. Arwind Santos finished with 16 points, while Marcio Lassiter and RR Garcia had 14 and 13, respectively, as the Beermen recovered from their shock defeat against Phoenix last Wednesday.

Jayvee Casio had the best night with 20 points for the Aces, who were playing without injured Calvin Abueva, Sonny Thoss, Noy Baclao and Rome dela Rosa. Vic Manuel and Ping Exciminiano were suspended for playing in "larong labas."

Next Game of Beermen and Aces: 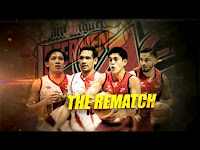