San Miguel wins Game 4 over Ginebra, one win away from Perpetual Trophy

The San Miguel Beermen defeated the Barangay Ginebra San Miguel 94-85 in Game 4 of the 2017 PBA Philippine Cup Finals, putting them one win away from third straight All-Filipino crown and get the Perpetual Trophy.

June Mar Fajardo, who received his fifth Best Player of the Conference award before tip-off, had another big game with 20 points and 13 rebounds.

Sharpshooter Marcio Lassiter scored 20 points on 8-of-13 shooting, while Chris Ross, the Best Player of the Game, added 17 points on 5-of-10 shooting from three with nine assists for Beermen, who now have a commanding 3-1 lead in the best-of-seven series.

The Beermen took a 20-2 lead early in the first quarter after a hot start in which they rained down six three-pointers.

In the third period, Lassiter's jumper pushed San Miguel's lead to 26 at 64-38, then Ginebra trimmed that lead to 13 at the end of the quarter led by Joe Devance.

LA Tenorio hit a three and Aljon Mariano scored on a layup to make it a seven-point game, 92-85, with 1:17 remaining in the game, but the defending champion responded and forced Ginebra to a turnover to derail the comeback.

Fajardo's layup with nine seconds left to play sealed the victory for Beermen.

Devance led Ginebra with 22 points on 9-for-12 shooting, while Japeth Aguilar and LA Tenorio had 12 apiece. 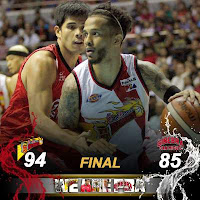