The Parañaque Patriots and Bulacan Kuyas battle for a semifinal slot in Game 3.

The top-two seeded Bulacan got the advantage in Game 1 with 83-73 win. The Patriots extended the series after crushing the Kuyas in Game 2, 81-54.

Here is the details for Parañaque vs. Bulacan in Game 3 of their best-of-three quarterfinal series in the 2018 Maharlika Pilipinas Basketball League (MPBL) Rajah Cup.

The seventh seed Parañaque Patriots pulled off an upset against second seed Bulacan Kuyas, 77-70, to advance to the semifinals.

Juneric Baloria led the Patriots with 16 points, eight rebounds and three assists while Harold Arboleda tallied a double-double with 12 points and 11 rebounds.

For Kuyas, who absorbed their first home loss, Hernal Escosio had team-high 13 points off the bench. James Martinez contributed 11 markers.

(To be added once available.) 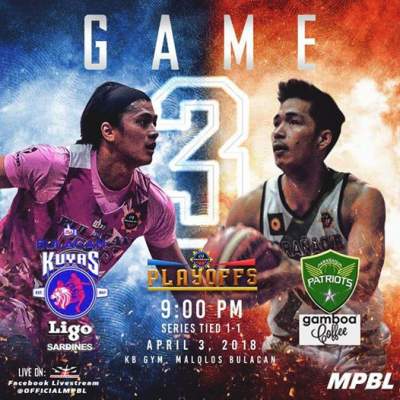