Batang Gilas will advance to the semifinals of the 2018 FIBA Under-18 Asian Championship after surviving a gritty stand by Bahrain, 67-52, in the quarterfinals on Thursday, August 9.

The win also gave the Philippines a spot in the 2019 FIBA Under-19 Basketball World Cup.

The Philippines men's national under-18 basketball team had a 9-point lead after the first quarter, with 20-11 on the score board.

Bahrain rallied in the second quarter and finished with a 21-0 run to lead by 8 points at halftime, 34-26.

With a fight back in the third quarter, Batang Gilas reclaimed the lead behind a 15-2 run led by Kai Sotto and capped by a booming three-pointer from Miguel Oczon.

Sotto scored 10 of his 21 points in the third period. He had two alley oops from Dalph Panopio and finished with 10 rebounds, three assists, and three blocks.

Philippines will face Australia in the semifinals on Friday. 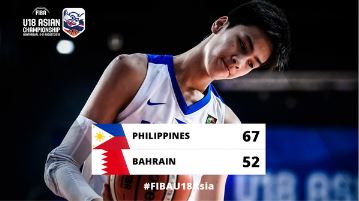