The final 12-man lineup of Gilas Pilipinas for the 2019 FIBA Basketball World Cup was announced by Samahang Basketbol ng Pilipinas on Sunday, August 25.

Naturalized big-man Andray Blatche will lead the Philippines when it competes in the FIBA World Cup that starts on Saturday, August 31, in China.

PBA rookies Robert Bolick and CJ Perez made the final cut, as well as Kiefer Ravena, who returned from his 18-month suspension on Sunday in a tune-up game with the Adelaide 36ers at Meralco Gym.

Joining the young guns and Blatche are June Mar Fajardo, Paul Lee, Japeth Aguilar, and Gabe Norwood – all of whom saw action in the 2014 FIBA World Cup in Spain.

Failing to make the cut were Poy Erram, Matthew Wright and Marcio Lassiter along with big man Beau Belga.


ADVERTISEMENT
Gilas Pilipinas will begin its World Cup campaign in Group Stage against Italy on August 31 before facing Serbia on September 2 and Angola on September 4.

The top two teams in the Group will advance to the second round, while the bottom two squads will be relegated to the classification stage.

The 2019 FIBA Basketball World Cup will be held between August 31 and September 15. 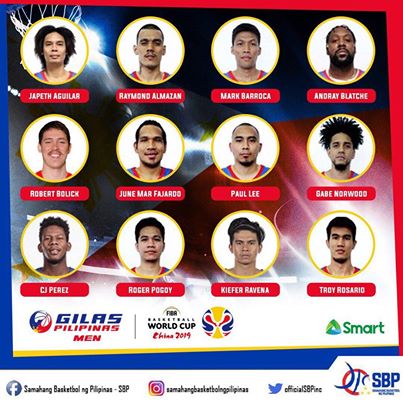