Watch the Opening Ceremony of the 2019 SEA Games live as it happens in Philippine Arena.

Here is how to watch on TV and online.

The much-anticipated Opening Ceremony will air LIVE exclusively on ABS-CBN on November 30 (Saturday) starting 6:50 pm. The live streaming is available on iWant.

Here is a list of broadcasters for the 2019 biennial meet:

This will be the first SEA Games opening ceremony to be held in an indoor venue.

Renowned composer Ryan Cayabyab and playwright Floy Quintos are going to work behind the scenes.

The Philippines has tapped the US-based Emmy award-winning FiveCurrents to produce the Opening Ceremony of the 2019 SEA games.

FiveCurrents, which has won 14 Emmy Awards, is the live content creators that produced the London (2012 Olympics) to Sochi (2014 Winter Olympics) and regional games ceremonies from Jakarta (2018 Asian Games) to Baku (2015 European Games).

The Opening Ceremony will feature a parade of athletes, lighting of cauldron, and performances from all-Filipino line-up of performers.

Filipino boxing champions Manny Pacquiao and Nesthy Petecio will light the cauldron at the opening ceremony of 2019 SEA Games at the New Clark City Stadium in Tarlac.

Asia’s Nightingale Lani Misalucha will lead the singing of the Philippine National Anthem, which will be followed by a four-part production, complete with song and dance numbers to be performed by celebrated Filipino artists.

Dancers from the Ramon Obusan Folkloric Group as well as student performers from different colleges and universities across the country will entertain the crowd through a variety of dances choreographed by Huling El Bimbo director Dexter Santos and veteran dancer Cherry Villanueva. 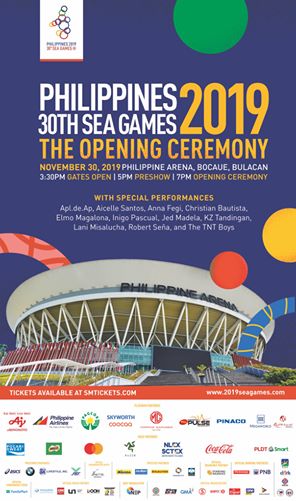