The 2022 AFF Women's Championship will be held from July 4 to July 17. Games will be played at the Rizal Memorial Stadium (RMS), Biñan Football Stadium (BFS), and City of Imus Grandstand (CIG).

A total of 11 women's football teams will compete in the 12th AFF Women's Championship. The participating teams are divided into two groups.

The defending champion Vietnam is in Group B along with Myanmar, Timor-Leste, Cambodia, and Laos. Group A is composed of Thailand, Philippines, Indonesia, Singapore, Malaysia, and Australia women's national under-23 football team.

Check out the team standings below.


*Top two teams from each group will advance to the semifinals.
Source: Asean Football Federation


The draw for the AFF Women's Championship 2022 just concluded and we're in Group A with Thailand, Indonesia, Singapore, Australia and Malaysia. The games will take place in July and will be held at Biñan Stadium in Laguna and Imus Grandstand in Cavite. 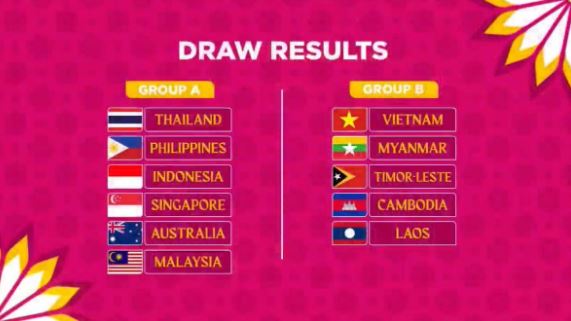