The Batangas City Athletics and Muntinlupa Cagers clash in the opener of their best-of-five finals series for the historic title of the inaugural Maharlika Pilipinas Basketball League.

The Athletics enters the first MPBL Finals after winning the semifinals against Valenzuela Classic.

For Cagers, they advance to the the Finals after defeating Parañaque Patriots in three games.

The top-seeded Batangas City will host the first two games of series, and the third-seeded Muntinlupa will host the third and if necessary, fourth game. If still needed, the deciding Game 5 will be in Athletics' homecourt.

Here is the details for Batangas City vs. Muntinlupa in Game 1 of their best-of-five finals series in the 2018 Maharlika Pilipinas Basketball League (MPBL) Rajah Cup.

The Batangas City Athletics hold on for a big 70-64 victory over the Muntinlupa Cagers to take a 1-0 series lead.

(To be added once available.) 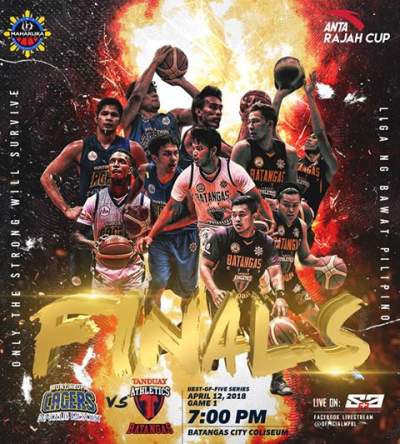